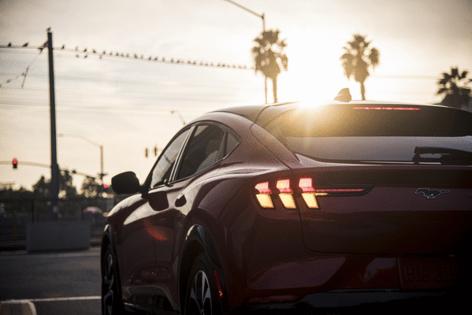 Car buyers looking at Ford Motor Co.'s new electric vehicles might face greater challenges negotiating deals under a new pricing model — the latest in a string of examples of how EVs are changing the auto retail landscape.

Ford is moving toward seamless pricing for new electric vehicles both online and at its dealers, meaning the customer is more likely to pay the same price whether in the showroom or online. The shift started with the all-electric Mustang Mach-E SUV and will apply to future Ford EVs. It's a move the automaker believes will offer customers transparency and consistency.

Bob Rayes, 50, of Frisco, Texas, ordered his Mach-E online in January. It arrived in June. He reached out to his dealer prior to then to get the financing ready: "There was no negotiation," Rayes said. "They basically told me the number is the number. Ford wasn't offering any rebates or discounts on them."

EVs represent many unknowns. How quickly they will sell and how much less in revenue from servicing they will provide dealers remain unclear. This is leading automakers to rethink their retail models, though state franchise laws seeking to protect independent dealers limit how much change can be made.

Tesla Inc. sells directly to consumers online, but it's had to challenge state statutes — including those in Michigan — in court. Volvo AB in March said it would go all-electric by 2030, selling those vehicles with "set pricing" only online, though it still will make use of its retailers. And General Motors Co. is considering a pilot regional delivery center for EVs later this year.

Ford isn't moving to direct sales, the Dearborn automaker insists. But what its dealers pay for the Mach-E, which starts at $42,895, is the same as the list price that consumers pay. In return for each Mach-E sale to a customer, the automaker pays a commission to dealers after they sell a vehicle. The 4.5% commission is for delivery and meeting conditions for advertising and being a certified EV retailer, according to part of a document outlining the program obtained by The Detroit News.

An additional 0.9% is available for dealers qualifying for the Ford Commitment Program, a way Ford assesses its retailers. The Ford Dealer Council was involved in the discussions about the pricing model. But the pricing model is creating concerns among some dealers.

The plan is good for low-production vehicles like the Mach-E, said Rhett Ricart, CEO of Ricart Automotive Group in Columbus, Ohio, which owns a Ford dealership. It's transparent for buyers and offers a decent margin since such models are typically higher priced.

"I looked at it with my management team, and we thought that was very fair," Ricart said. "It's a well-thought-out program."

Where it could become more cumbersome — and potentially more contentious — is with larger-volume models and those with gas- and diesel-powered counterparts like the F-150 Lightning all-electric pickup. It is scheduled for production next spring at a starting price of $39,974, excluding destination fees.