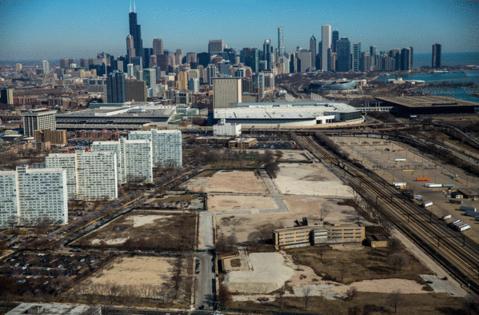 The Chicago City Council has approved the sale of the former Michael Reese Hospital site and zoning for a $4 billion mixed-use redevelopment, inching the proposed Bronzeville lakefront project closer to breaking ground.

The $97 million sale of the medical campus will allow a coalition of development companies to move forward on nearly 8 million square feet of commercial, institutional and residential spaces, according to the city’s Department of Planning and Development.

The city selected GRIT Chicago, a team comprised of six development groups, to purchase and develop the property, which the city bought for roughly the same price in 2008.

“This is a mega-development that will truly impact the entire city,” Ald. Sophia King, 4th, said. “While it will bring billions in economic development to the city and the community, it will also bring other tangible investments.”

At the City Council meeting Wednesday, aldermen earmarked $60 million for improvements to neighboring roads and a new, two-acre public park that will stretch from 26th to 31st streets and from Cottage Grove to Lake Park avenues. GRIT will be responsible for any costs that exceed the approved $60 million budget.

Construction could begin as early as this fall on the Bronzeville Lakefront infrastructure, including extending roads around the former hospital site, said Scott Goodman, founding principal of Farpoint Development. His firm is part of GRIT.

GRIT’s development plan is twofold. First, ground will break on the southern end of the property at 31st Street and Cottage Grove Avenue. The 500,000-square-foot structure will house the Arc Innovation Center led by Israel’s Sheba Medical Center, which will lease about one-quarter of the building. The project also will open a Bronzeville welcome center and digital museum to memorialize and pay homage to the community’s history, King said Wednesday.

In the second phase, the northern potion of the site will be developed with residential units and commercial spaces. As part of its agreement with the city, 20% of GRIT’s anticipated 4,800 residential units will be offered at reduced rents for low-income people. GRIT will also be required to pay $25 million toward expansion of area public schools.

The development is expected to create 48,000 jobs, and GRIT expects to meet a goal of 30% minority suppliers to build Bronzeville Lakefront.

“We think this can be a model for developments nationwide or even globally,” Goodman said. “It’s going to be sustainable, it will be a healthy community and it’s focused on diversity, equity and inclusion.”

It is one of several changes the Target-owned company has announced in recent months as...Read More

A weekslong strike at six Mondelez facilities ended after employees “overwhelmingly” voted to approve new four-year contracts with the maker of brands such as Oreo, Cadbury and Ritz.

Employees represented by the ...Read More

Wrestling with an insurance crisis that’s bedeviled much of rural California for years, the state imposed a one-year ban Monday that prevents carriers from dropping homeowners in areas affected by the Dixie Fire, Caldor ...Read More

ST. LOUIS — David Kanen sent two letters to St. Louis companies on a recent Thursday, and neither was very friendly.

The Florida-based investor told appliance retailer Goedeker's that more than half its board needs to ...Read More