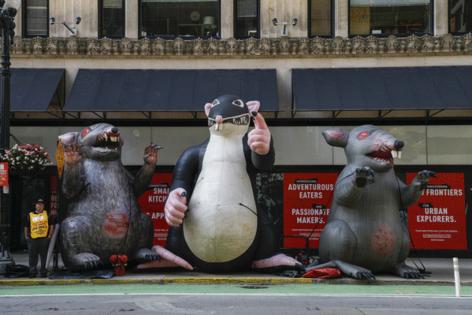 Threatened with extermination for allegedly scaring away attendees at an Indiana RV show, Scabby, the Chicago-born giant inflatable protest rat, has been exonerated by the National Labor Relations Board.

In a ruling issued Wednesday, the board found Scabby’s hulking presence alone did not violate the National Labor Relations Act, dismissing a 2018 complaint that could have ended the widespread use of the rat balloon at union protest sites.

For 30 years, Scabby has loomed over construction sites, drawing attention to labor disputes with its allegedly menacing demeanor. But under the Trump administration, Peter Robb, then the NLRB’s general counsel, argued that Scabby is a form of unlawful coercion not protected under the National Labor Relations Act or the First Amendment because it was used to “menace, intimidate and coerce” potential customers, according to filings.

President Joe Biden terminated Robb in January, and the board’s decision Wednesday rejected the argument that Scabby was scaring away customers from “neutral” businesses not involved in the labor dispute.

“We are not persuaded that the inflatable rat must be deemed intimidating and coercive ... because of its size or appearance,” the board said in its ruling.

The official Scabby the Rat was created by Big Sky Balloons in southwest suburban Plainfield circa 1990. Since then, the giant snarling rat balloons have found their way across the country and into the broader culture, making a memorable cameo on a “Sopranos” TV episode centered around a construction work stoppage.

The 2018 complaint was filed by Elkhart RV parts manufacturer Lippert Components against the International Union of Operating Engineers Local 150, which is based in west suburban Countryside.

The complaint alleged the union posted a 12-foot inflatable rat and two banners near the public entrance of a 2018 RV trade show in Elkhart to deter attendees. In July 2019, an administrative judge ruled the union did not violate the National Labor Relations Act, but Robb, then the board’s general counsel, challenged that decision.

In October, the agency issued an order inviting public comment in the case. The board received 30 briefs weighing in on the fate of Scabby, which it took into consideration in its decision to dismiss the complaint.