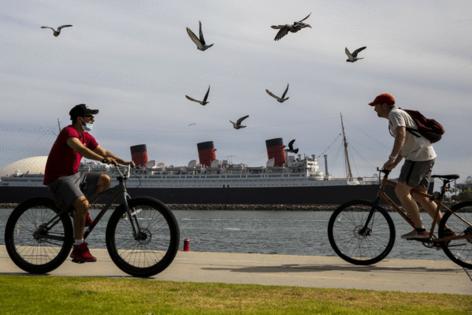 The aging Queen Mary could cost the city of Long Beach, Calif., up to $175 million to preserve and maintain over the next 25 years but it could cost even more — up to $190 million — to recycle for scrap or sink into the ocean.

Those were some of the options considered Tuesday by the Long Beach City Council, which formally took control of the ship last month after the company that held the ship's lease and the surrounding land filed for bankruptcy protection.

The council took no action at the study session to discuss the future of the 87-year-old vessel but most of the council members spoke in favor of preserving the ship as it is — a floating hotel and tourist attraction — or turning it into a historical monument under the control of a federal agency.

Docked on the city's shore since 1967, the former ocean liner has long been a challenge to operate. A 2017 study recommended that as much as $289 million worth of renovations and upgrades were needed to keep parts of the ship from flooding. According to documents filed recently in Bankruptcy Court, the Queen Mary needs $23 million in immediate repairs to prevent it from potentially capsizing.

Most of the costs to retire or sink the ship would come from dismantling and transporting it to a scrap facility or a location in the ocean where it would become an artificial reef, according to a city report.

The costs were calculated by Moffatt & Nichol, the marine engineering firm hired by the city to evaluate the repairs needed for the ship. A detailed study of more immediate repairs is expected in the next few weeks. Teams are inspecting the hull, the metal thickness and the fire suppression system on the ship, according to a city report.

The company that held the lease to operate the ship for the last 11 years, Eagle Hospitality Trust, filed for bankruptcy protection in January and agreed to surrender its lease agreement. Long Beach, which owns the ship and the property around it, said Eagle Hospitality has been in default of several provisions of the lease, including failure to maintain the aging ship. City Auditor Laura Doud told the council that a subsidiary of Eagle Hospitality has not cooperated with a request for documents to audit the spending on ship repairs.

During the nearly two-hour meeting Tuesday, several council members voiced support for preserving the ship, noting that it has not been a drain on taxpayer funds and has generated $3.3 million in tax revenues annually from its operation as a hotel, a venue for concerts and festivals and as a film location. The ship has been closed for the last year because of the pandemic.

Council Member Suzie Price suggested the city consider having the ship become a national monument under the control of a federal agency. She asked city officials to pursue that option and return to the council with more information.

Vice Mayor Rex Richardson said it would be "irresponsible" to discuss sinking the ship and said he would prefer a plan to operate the ship over the next 100 years. He suggested adding a theme park or a gambling venue to the ship.

"We have to be open to all opportunities," he said.

More than 60% of the nearly 400,000 U.S. workers Amazon hired into its lowest-paying hourly roles between 2018 and 2020 were Black or Hispanic, and more than half were women, according to new employee demographic data for ...Read More

Amazon and other warehouse operators across California will face new regulation of their labor practices under a law signed by Gov. Gavin Newsom Wednesday evening.

Comcast has launched a new streaming device called XiOne, its first to be available for all of its customers worldwide.

Applications for U.S. state unemployment benefits unexpectedly rose last week, led by a surge in claims in California, a sign of choppy weekly data as the labor market continues its broad recovery.