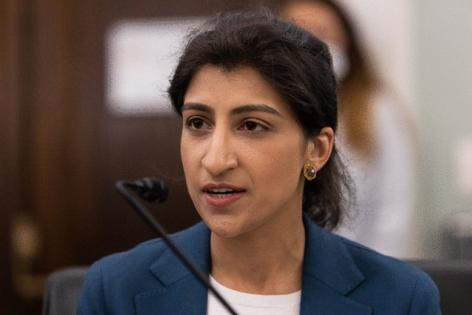 WASHINGTON — Facebook Inc. wants Federal Trade Commission Chair Lina Khan to be recused from participating in decisions about the agency’s monopoly lawsuit against the company, saying her past criticism of Facebook means she’s biased.

On Wednesday, Facebook filed a petition with the FTC, asking that she be barred from any involvement in the antitrust case, citing her academic writings and her work on a House committee that investigated tech companies, including Facebook.

“For the entirety of her professional career, Chair Khan has consistently and very publicly concluded that Facebook is guilty of violating the antitrust laws,” Facebook said. Her statements “convey to any disinterested observer that Chair Khan, well before becoming a commissioner, had already decided the material facts relevant to Facebook’s liability.”

The petition comes as the FTC must decide by the end of the month whether to refile its antitrust complaint against Facebook, which seeks to break up the company by splitting off Instagram and WhatsApp. A judge in June dismissed the case, saying the agency hadn’t fully explained its claim that Facebook has a monopoly in social media. He gave the FTC 30 days to fix the error and refile.

Facebook’s request mirrors one made by Amazon.com Inc., which argued that Khan’s criticism of the online retailer made clear she has already judged that the company has violated antitrust laws.

President Joe Biden named Khan chair of the agency in June after she was confirmed by the Senate. The move put one of the most prominent critics of big business in charge of the agency, which shares antitrust enforcement duties with the Justice Department.

In its petition, Facebook pointed to an academic paper Khan wrote for the Columbia Law Review titled “The Separation of Platforms and Commerce.” The paper outlines how Facebook, Amazon, Apple Inc. and Google have integrated across multiple business lines to become what she described as gatekeepers of the digital economy.

Khan wrote that Facebook “has both foreclosed competitors from its platform and appropriated their business information and functionality.”

Khan was also one of the authors of a House antitrust report last year that accused the four tech giants of abusing their dominance and recommended a host of reforms to antitrust laws that lawmakers are now pursuing.