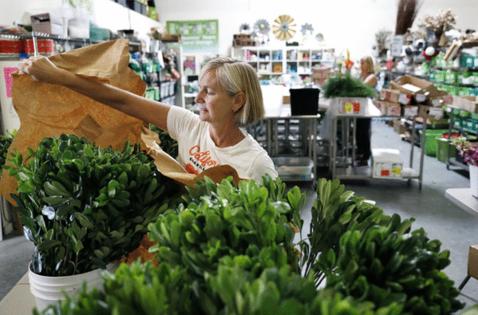 May was the fourth month that Golden State payrolls grew by more than 100,000 positions — a faster post-recession rate than in any previous recovery.

Employment grew to 16.35 million jobs, but just 51.8% of the 2.7 million lost in March and April 2020 had returned as of last month, state officials reported Friday.

"A full California labor market recovery from this pandemic is still likely several years away," said Scott Anderson, an economist with Bank of the West in San Francisco. "Even with stepped-up job growth, California has been unable to close the yawning unemployment gap with the nation."

The Golden State's jobless rate fell slightly last month, to 7.9% from a revised 8% in April. It was a vast improvement from a 16% peak in April 2020, but that rate was considerably higher than the pre-pandemic rate of 4.3% in February 2020.

Unemployment in Los Angeles County, which is still suffering from the loss of international tourism and the slow recovery of entertainment industry jobs, was stagnant at 11.1% in May, the same as in April.

Nationwide, unemployment stood at 5.8% in May and the U.S. had recovered 66% of the jobs it lost during the pandemic.

Still, many economists are optimistic that with expanding vaccinations and the lifting of restrictions on California businesses this week, the labor market will accelerate.

"We are emerging from the scourge of COVID-19," said Lynn Reaser, an economist at Point Loma Nazarene University in San Diego. "With California's economy fully open as of June 15, job prospects for the rest of the year are very strong."

Flower Duet, a floral design company in Torrance, rode the pandemic's roller-coaster economy and is just now poised for a return of its once-thriving events business.