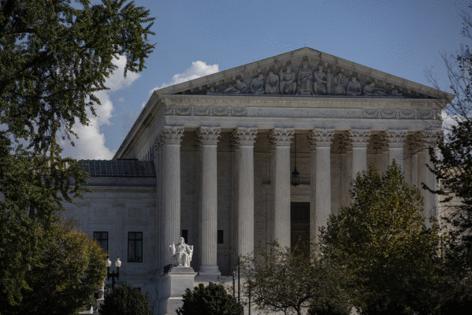 Democratic lawmakers and much of the health care industry cheered the Supreme Court’s ruling Thursday to uphold the 2010 health care law.

Democrats had campaigned against the legal challenge during the past two campaign cycles, arguing that their party would protect health insurance coverage. The decision comes as Democratic leaders are determining which health care provisions they may include in a fiscal 2022 budget resolution.

The ruling will not lead to significant policy changes for people who gained health insurance coverage through the law’s state and federal exchanges or its expansion of Medicaid, which covers low-income Americans.

In the 7-2 decision, the Supreme Court upheld the law known as the Affordable Care Act and its requirement that most Americans must have coverage or face a penalty by ruling that the conservative state officials and individuals did not have standing to bring the legal challenge. That narrow ruling sidestepped broader legal questions underlying the case.

Conservative state officials and individuals had argued that the law was invalid after Republicans effectively ended that so-called “individual mandate” as part of the 2017 tax law by lowering the penalty for not having insurance to zero.

The Supreme Court’s third major ruling on the law — which, like other decisions, did not endorse the statute’s policies — comes as the law’s popularity is at a high point. About 53 percent of Americans had a favorable opinion of the law in May, according to the Kaiser Family Foundation, while 35 percent had an unfavorable opinion.

“Yet again, Republican ideological fantasies to turn back the clock on American health care have been defeated. This ill-begotten lawsuit was filed with one goal in mind: throw the American health care system into chaos,” Senate Finance Chair Ron Wyden, D-Ore., said in a statement. “Now that this tired crusade has once again failed, it is time for Congress to get to work building on the strides that have already been taken to make health care in America affordable and accessible for all.”

Several health care industry groups had urged the Supreme Court to uphold the law in amicus briefs filed before the November oral arguments. Hospitals, physicians, insurers and others stood to lose financially if the law had been overturned.

“With yet another court decision upholding the ACA now behind us, we remain committed to strengthening the current law and look forward to policymakers advancing solutions to improve the ACA,” Gerald Harmon, president of the American Medical Association, said in a statement that used the law’s acronym.

Chip Kahn, president of the Federation of American Hospitals, noted that more Americans have gained insurance coverage through the exchanges set up under the law during the COVID-19 pandemic. The Centers for Medicare and Medicaid Services said this week that more than 1.2 million people have signed up for coverage since the beginning of a current special enrollment period that the Biden administration opened in February.

“The COVID-19 pandemic has shown the true value of this law with a record number of consumers now getting affordable coverage through ACA exchanges,” Kahn said in a statement.

The law’s impact on insurance coverage largely held steady despite Republican efforts over the years to overturn it. The percentage of Americans without insurance dropped from 17.8 percent in 2010 to 10.0 percent in 2016, according to the Kaiser Family Foundation.

The rate of uninsured Americans inched up to 10.9 percent in 2019 after the Trump administration cut advertising about insurance coverage and took steps to discourage enrollment. Republicans’ elimination of the individual mandate also may have contributed somewhat to the uptick, although none of the GOP efforts led to a dramatic loss of insurance.

Some Republicans had tried to distance themselves from the legal challenge, while others criticized the Supreme Court’s ruling.

“It’s a shame the highest court in the country ruled today that Americans aren’t harmed by this broken law. Obamacare’s individual mandate restricts Americans’ freedoms by forcing them to purchase coverage they don’t want and can’t afford,” Rep. Virginia Foxx of North Carolina, the top Republican on the House Education and Labor Committee, said in a statement. “Today, the court again missed the mark by ignoring the negative impacts Obamacare and its mandates have on our nation’s health care system.”