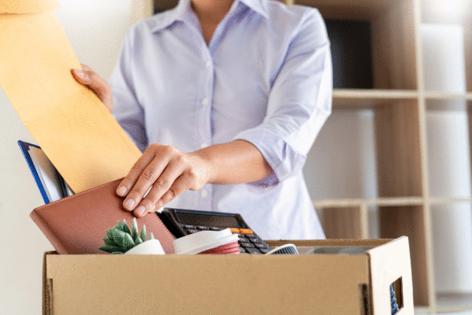 In late May, Sarah Lynch pulled the rip cord.

The 31-year-old brand designer had been working at Coursera, the online education company, for five years. During the pandemic, a booming business in virtual learning meant Lynch was busier than ever — and sinking into burnout.

"I love my company, and I love my work, but I couldn't keep pushing on through," Lynch said. "I didn't have really any energy, I didn't really enjoy what I was doing anymore, I couldn't really focus."

Then Coursera went public. Like many workers on the upper levels of the income scale, whose savings have been buoyed by a bull market, Lynch found herself sitting on a financial cushion for the first time in her life thanks to her stock options.

"I recognize it's extremely privileged to have this cushion now, but I can take the time off that I've really been wanting to," Lynch said. "I don't have another job lined up after this, and that's like — I come from a working-class background, you don't just quit a job and not have another job." But she's looking forward to spending time working on her design portfolio, slowing down, reading some books and taking a pottery class.

"I haven't had a break in 10 years," Lynch said, since she graduated in the recession, worked her way through a master's degree and landed a good job. Now she's rethinking her future: "Do I really want to burn myself out over and over again?"

More than 3.9 million people quit in April, according to the Bureau of Labor Statistics, marking the highest quit rate — the ratio of people quitting their jobs to total employment — since the agency began collecting that information in 2000. The number of job postings also hit a record high, with 695,000 more open positions than unemployed workers.

Workers in industries that typically have a high level of turnover, such as retail, warehousing and food service, quit in large numbers. Professional and business services — a catch-all category that includes many of the country's office jobs — saw the second-highest surge in quits, with 94,000 more workers leaving their jobs in April than in March.

Untangling trends and meaning from national numbers can be difficult, and quitting is not an option to be taken lightly for most workers. In hospitality or Hollywood, where most workers have been out of a job for much of the last year, going back to work at all is still a priority.