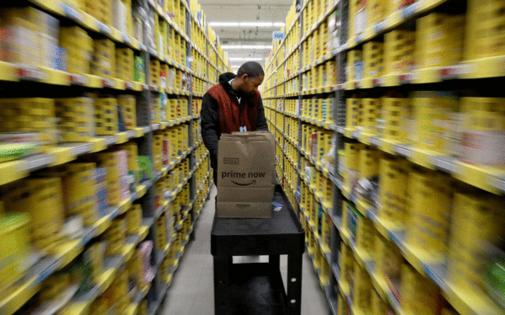 Amazon says its productivity targets for warehouse workers will remain unchanged despite a determination last month from Washington state's workplace safety regulator that the pressure Amazon places on workers to meet those targets is causing injuries and violating the law.

"Safety and performance targets can go hand in hand, that can continue to be the case," said Heather MacDougall, Amazon's vice president of worldwide health and safety, at a news conference Wednesday.

Amazon is donating $12 million to the nonprofit National Safety Council, a workplace safety advocacy organization, in part to establish a cross-industry task force on the type of muscle, joint and ligament injuries that make up 40% of the injuries sustained by Amazon's warehouse workers, MacDougall announced at the conference. The donation will also be used to research ways to lower the incidence of such injuries, including through grants to small businesses and universities and by funding competitions to find new ways to address workplace injuries.

Amazon has previously committed to lowering by half the incidence of muscle and joint injuries among its workforce, part of founder Jeff Bezos' recently announced vision of turning Amazon into the "Earth's Safest Place to Work."

The company will not publicly release data about its progress on reducing injuries, MacDougall said Wednesday, but will share injury statistics with the National Safety Council.

Amazon did not respond directly to questions about the citation last month from Washington's Department of Labor and Industries, which found Amazon's focus on speed created "hazardous" working conditions at the company's fulfillment center in DuPont, Pierce County. Amazon has previously said it disagrees with the regulator's findings and has appealed the citation, which resulted in a $7,000 fine, the maximum for a serious citation.

Amazon spokesperson Alyssa Bronikowski said in an email that workers are given ample time to rest during shifts, and that the company is "continuously learning and seeing improvements."

Among Amazon's contract delivery drivers, injury rates are even higher than at warehouses: Drivers are hurt at double the rates of fulfillment center workers and seriously injured more than three times as often as drivers at logistics competitor UPS, according to a report last week from the Strategic Organizing Center, a national labor coalition.

Amazon announced last week that it will ease up on a productivity tool that penalizes workers for taking breaks. The metric, "time off task," charts how long a worker has gone without scanning an item. Workers who accrue too much time off task — typically more than an hour or two per shift — can be disciplined or fired.

"Time off task is a real culprit when it comes to driving workers to work beyond their physical limits," said Debbie Berkowitz, a former federal Occupational Safety and Health Administration official and current director of the worker health and safety program at the National Employment Law Project, in an interview last week.

It's not clear, though, whether that change has taken effect or been communicated to employees. Workers at three Amazon warehouses, including two in Washington state, told The Seattle Times that they haven't received anything in writing outlining the policy change or noticed any changes in how workers' productivity is tracked. The three workers requested anonymity because they weren't authorized to speak to reporters.

3M said Thursday that U.S. marshals have seized more than 1 million counterfeit versions of its N95 respirators from a warehouse in Lexington, Ky.

It's the latest of a long line of fake N95 confiscations since the COVID-...Read More

Doctors and hospitals strenuously objected to the plan, with emergency ...Read More