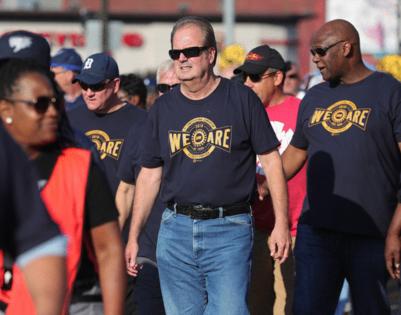 The man who led one of America's most storied labor unions during its 40-day strike against General Motors in 2019 has been sentenced to 28 months in prison, a reduced penalty rewarding him for his cooperation in the long-running federal corruption probe of the UAW.

The sentence Thursday morning was an in-person proceeding, a shift from the way many of the recent sentencings in the case have been handled because of the coronavirus pandemic. Most observers, however, watched Judge Paul Borman in U.S. District Court in Detroit via Zoom as he handed down a sentence against Gary Jones that also included a $10,000 fine and an order for restitution — $42,000 to the IRS and hundreds of thousands of dollars to the UAW.

Jones was painted by both the prosecution and defense as someone who had continued a tradition of corruption within the top ranks of the UAW rather than starting it.

“He was a good man who found himself ... and worked in, a culture of corruption, which was the leadership of the United Autoworkers Union,” Assistant U.S. Attorney David Gardey told the judge.

Gardey cited Jones' cooperation in the case, which led to another high-profile conviction and the current agreement with the government for oversight of the union, and said he believes Jones has "a broken and contrite heart."

But Gardey acknowledged that Jones, with his skills as an accountant, made the corruption worse, and he noted an "inexplicable" part of the Jones case: the "pure theft" of $45,000.

Gardey noted that there were three separate "schemes of criminality" within the union, including a bogus billing scheme tied to union conferences involving Jones. The others, involving worker training centers, included kickbacks and bribery related to union contracts and a third thread involving Fiat Chrysler Automobiles, now part of Stellantis since the merger with Peugeot-maker PSA Group, and an effort to keep union leaders "fat, dumb and happy" to buy labor peace.

Gardey also noted that a lack of union democracy at the highest levels means there's no opposition to the UAW's Administration Caucus, a nod to the effort to change the way union leaders are picked that is incorporated in the settlement with the government.

The dissident UAW group, Unite All Workers for Democracy, highlighted that effort in its comments on the Jones sentence.

"The monumental corruption of Gary Jones and his co-conspirators was possible because of the lack of real democracy in our union. UAW members need tools to keep our officers honest and accountable to the membership. Direct election of the UAW’s top officers by giving every member the right to cast a ballot for the candidate of their choice will do just that,” Scott Houldieson, chair of the UAWD, said in a statement.