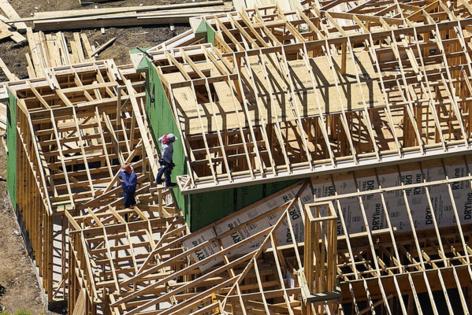 At times, bills are coming in thousands or even hundreds of thousands of dollars over estimate. In the most extreme cases, projects have come to a screeching halt as prices spiral out of control.

Ken Kahan, president of developer California Landmark Group, said he paused work on a 50-plus unit apartment project in the Los Angeles area after a lumber bid came in triple the original projection. “When you look at commodities do that — either the world is turning upside down or there is just a gyration that just needs to settle down.”

Kahan hopes to restart the project in coming months if lumber prices stabilize, but analysts said pricing is likely to remain elevated for a prolonged period because of the COVID-19 pandemic. When the coronavirus started to spread in the U.S. last year, lumber suppliers assumed demand would plunge, and they stalled production accordingly. Distributors followed this lead, stopped buying lumber and sold off inventories.

But the companies predicted wrong. Many Americans, stuck spending more time at home, decided they wanted a change and sought to remodel. Others sought out a newly built home, including well-off renters who wanted more space and a yard. Those kinds of construction require a lot of lumber.

Suppliers and distributors can’t immediately reverse the effects of their decision because there aren’t enough skilled workers or active mills to process the wood. “It was just this mad catch-up to ramp everything back up, but it just doesn’t work that way,” said Greg Kuta, chief executive of Westline Capital Strategies, which specializes in lumber trading.

In early May, lumber futures peaked, up more than 300% from a year earlier. Prices have since come down somewhat, but they’re still up more than 200% compared with this time last year.

The inflated prices may last a while. “I don’t think that you’re going to see this level out for probably 12 to 18 months,” said Tony Uphoff, CEO of Thomas, a sourcing platform that connects companies with industrial suppliers.

Part of the problem is that the U.S. relies on lumber from Canadian forests — a supply that has shrunk in recent years, Uphoff said. In 2017, the Trump administration imposed a 24% tax on softwood lumber imported from Canada, and in response, several Canadian mills shut down. “That actually was the initial step that created some of the problems we’re still seeing in the supply chain today,” Uphoff said.

Despite the constraints, construction of new homes is still on the rise this year, reflective of a hot housing market developers say they are rushing to meet.