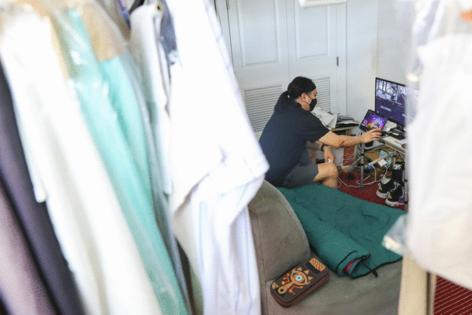 The pandemic has diminished the use of professional and formal attire, leaving the dry cleaning business well below 2019 levels and causing cleaners to worry that COVID-19 has permanently altered the viability of their industry, which has struggled ever since non-iron shirts become popular. In Illinois, it’s a decline that hits particularly hard in the Korean American business community, which owns the majority of the dry cleaners in the state.

Shin Kim, manager of Chicago Cleaners in the Noble Square neighborhood, said that while more customers are starting to drop in with clothing for special events — suits, dresses, tuxedos — the overall volume of clothing he’s cleaning is way down thanks to a lack of day-to-day items like dress pants and dress shirts.

“Because of the pandemic, it’s kind of a dying service or business, you could say,” Kim said.

The pandemic has resulted in a wave of closures across the state. Sue Kratz, an executive director at the Illinois Professional Drycleaners and Launderers, said there are 549 licensed dry cleaners in Illinois — a 20% decrease from the 688 in business at the end of 2019. Approximately 80% are run by Korean Americans, and many of them are small mom and pop shops, she said.

The industry has been losing about 30 dry cleaners a year since the early 2000s, but “COVID has definitely stepped up that pace,” Kratz said. She believes the industry has hit its bottom and hopes the current number of dry cleaners can be maintained.

For many of the mom and pop shops that have been in business for years, “economically, they’re back to square one with their business,” said Steve In, a board member at the Illinois Korean American Dry Cleaners Association.

Compared to the leisure and hospitality industry, he feels dry cleaners were overlooked when it came to federal help during the pandemic. The Paycheck Protection Program was designed to help small businesses keep workers on the payroll, but most dry cleaners employ fewer than three people, according to a letter sent by the Illinois Korean American Dry Cleaners Association to Gov. J.B. Pritzker.

“Now we’re starting to see a little bit of a comeback but the damage is pretty much done. We need financial support from the government to keep the existing cleaners from shutting down,” In said.

Tim Batkhuu, manager at Lucky Dry Cleaner & Laundry Service in Lakeview, has also noticed more clothing tied to events like weddings, but a much lower volume of clothing overall when compared with 2019.

Even as Chicago is set to lift restrictions, he doesn’t think business will be the same as before. The industry was already suffering because of casual Fridays and a shift toward organizations allowing for more casual dress codes, he said. The situation may worsen as more companies allow employees to continue working from home or in a hybrid format.

Batkhuu said a majority of his clients have told him they expect to go back to the office in September. But with the business two months behind rent, Batkhuu said summer will determine whether Lucky Dry Cleaner & Laundry Service permanently closes.

“We make money by volume. So when that’s gone, the margins are small,” Batkhuu said.

Like other dry cleaners, Jason Oh, owner of New S.O.S. Dry Cleaners in Buena Park, said he’s experienced a recent uptick in traffic thanks to graduations and weddings, but his business is still struggling. He said business is down close to 80% since the pandemic began.

Like other businesses, he’s raised his prices — by a quarter — because the business cannot operate on the same budget as before. He’s also worried COVID-19 has altered people’s lifestyles to the point that business will never be the same.

Even as financial pressure mounts, Oh emphasized that above all else he wants everyone to “stay clean and safe and happy.”