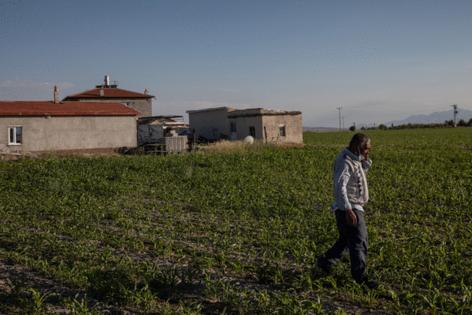 Global inventories are shrinking and demand is on a tear as drought plagues farms in key producers from the U.S. and Brazil to Russia. As a result, every rain shower and dry spell is coming under extreme scrutiny. Grain prices have touched near-decade highs, and whether they rally to further heights or retreat depends in large part on the condition and quantity of plants over the next few months.

In the U.S., traders and investors usually focus their attention on giant corn and soybean growers like Iowa and Illinois. Now, they’re obsessing over droughts in second-tier producers like North Dakota and Minnesota. Dry weather has already inflicted damage on South America’s corn crop. Meanwhile, there’s no let up in demand as China scours the globe for all the grains it can find as it tries to modernize and feed its hog herd, the biggest in the world.

“Every bushel matters,” said Kevin McNew, chief economist at agriculture-tech firm Farmers Business Network, “even though we may be talking about drought in lesser growing corn and soybean areas like the Dakotas.”

Heightened anxiety over the weather comes as markets await the U.S.’s monthly world supply and demand report, known as WASDE, due for release Thursday. For corn, the agency is expected to trim forecasts for U.S. and global stockpiles as well as Brazilian output, according to a Bloomberg survey.

The report has already jolted the market once this year. With world crop inventories at risk of running short and food inflation worsening, corn futures leaped close to eight-year highs on March 31, when the U.S. shocked the market by not projecting as many planted acres for the new season as expected. Crop prices have recently retreated, but the chance of worsening drought is putting daily weather forecasts in the spotlight.

Thursday’s report, however, may not provide a lot of clarity, as the U.S Department of Agriculture may want time to monitor weather patterns as it prepares a highly anticipated June 30 forecast update on planted corn and soybean acres. The agency will likely take a “wait-and-see approach,” according to Ken Morrison, a St. Louis-based independent commodity trader.

In the U.S., growers are nervously watching to see if extreme drought in western states and North Dakota spreads deeper into the central Farm Belt.

Hot weather over the next two weeks in those key corn-growing areas will lower yields if there isn’t enough rain, said Jacqueline Holland, an analyst at Farm Futures.

There is some hope for relief. Unlike the last major drought in the U.S. in 2012, when lower-than-normal humidity levels reduced rain, moisture from the Gulf of Mexico this year could create conditions for “typical summertime rainfall” in the central and eastern Midwest, according to Dan Hicks, meteorologist at Freese-Notis Weather in Des Moines, Iowa. Danger zones for dryness are in the northwestern Midwest and Northern Plains, he said.

The most-active corn, soybeans and benchmark winter wheat futures contracts in Chicago have eased in the past four weeks as favorable weather aided crops. The Bloomberg Grains Spot Subindex, up more than 70% in the last year, is down 7% since early May.

Some regions have been hit by heavy rains, saving hard winter wheat in Kansas and nearby states from drought. At the same time, too much moisture is raising crop quality concerns and in some cases delaying harvest currently underway.

In North Dakota, which grows much of America’s hard spring wheat used in pizza dough, croissants and bagels, searing temperatures and lack of adequate rain have hurt crop progress.

Across the Atlantic a similar dynamic is playing out. Farmers in the European Union and Black Sea region expect to reap lush winter-wheat crops after May rains, while stretches of the spring-wheat region in top shipper Russia are suffering from a dry spell.

“The weather had to be perfect and it hasn’t been,” Holland said. “The question now is how the rest of the growing season shapes up.”