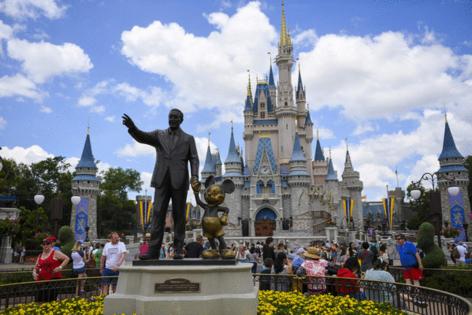 ORLANDO, Fla. — For the first time in nearly a year, visitors won’t have to wear a face mask outdoors at Universal Orlando or Disney World, as both theme parks relaxed the COVID-19 rule within hours of each other Friday night.

The new policy at both parks goes into effect Saturday.

Guests don’t have to wear a mask outdoors at Universal but are still asked to bring masks with them to wear when they go inside, according to a statement sent Friday from Universal spokesman Tom Schroder.

There is one caveat: Anyone in an outdoor line for a ride must have a mask on.

At Disney World, masks are still required for indoor spaces including theaters throughout the attractions, on Disney transportation and at restaurants, except when guests are eating or drinking while stationary, according to the new posted rules online. Masks are optional in outdoor common areas and pool decks.

Disney World spokeswomen did not respond to a request for comment after Universal changed its policy first. Then Disney quietly updated its safety rules late Friday on its website.

Universal and Disney’s changes come a day after the Centers for Disease Control and Prevention released new guidelines saying that people vaccinated for the coronavirus don’t have to wear masks in most places. The CDC still calls for masks in crowded indoor settings, but the new rule should help clear the way for reopening more workplaces and other venues.

On Thursday, Walt Disney Co. CEO Bob Chapek had hinted that Disney could be changing its mask policy soon, which he said would be “very big news” as a hot Florida summer is approaching. He did not provide a timeline for when that would happen.

“Anybody [who has] been in Florida in the middle of summer with a mask on, that can be quite daunting, so we think that’s going to make for an even more pleasant experience,” Chapek said on an earnings call.

Chapek also said attendance limits at Disney World have also been increased beyond a previous 35% cap but again did not provide details.

On Friday, Disney World spokeswomen declined to comment on what the current capacity level is now.

Orange County Mayor Jerry Demings also did not say how much attendance has gone up at Disney when the Orlando Sentinel asked Friday during the county’s regular press conference. Demings said he was aware Disney’s attendance capacity cap was rising but said the company was still following CDC guidelines.

“What they’re doing is very responsible,” he said.

SeaWorld did not respond to a request for comment on its mask rules Friday.