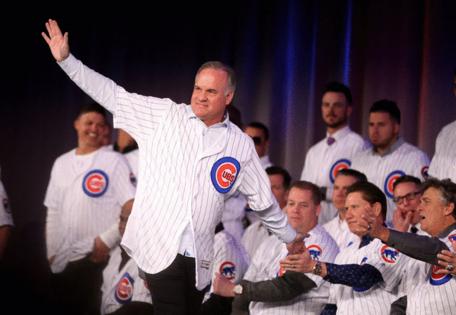 Ryne Sandberg, the former Cubs great and Hall of Famer, is the new spokesman for Chicago-based cannabis retailer Verilife, the surest sign yet that weed has gone fully mainstream.

Sandberg, 61, whose All-American image and on-field heroics cemented his place in Cubs lore, is arguably one of the greatest second basemen in baseball history. He’s also one of the least likely celebrity endorsers of cannabis, having never tried weed until this year.

“I really didn’t know anything about it, I didn’t have any interest in it,” Sandberg said. “Now it’s every day sometimes, as I’m looking for something to take the edge off.”

Verilife is owned by PharmaCann, a private Chicago-based cannabis company with a six-state footprint. The company has seven Illinois dispensaries with an eighth set to open in Schaumburg this summer. The Sandberg endorsement includes billboards, social media advertisements and dispensary appearances, starting with a May 23 meet-and-greet in River North.

Sandberg’s journey from newbie to doobie began with a December visit to the PharmaCann cultivation center in Dwight, about 100 miles southwest of his north suburban Lake Bluff home. He hit a Verilife dispensary the same day.

“I was able to drive down and take a tour,” Sandberg said. “It was pretty remarkable first time seeing anything like that and I was just highly impressed with the whole operation.”

After testing out products for a couple of months, Sandberg found his groove with low-dosage gummies and tinctures, employing a “low and slow” approach, which he uses for everything from pain relief to unwinding at night. He agreed to become spokesman for Verilife in March.

Sandberg also become an investor in the company.