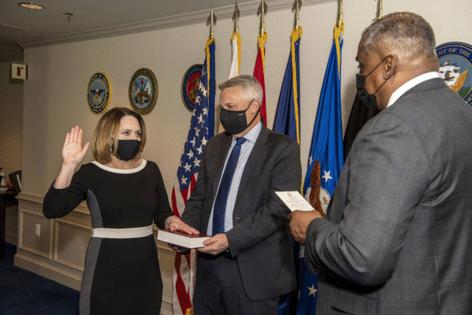 As Army Futures Command continues to expand its presence and modernization efforts around its base in Austin, Texas, its best practices could help model innovation for the Department of Defense and the rest of the military.

On Tuesday, U.S. Deputy Secretary of Defense Kathleen Hicks toured several Austin sites for the Austin-based innovation unit to learn more about how it's working to harness and acquire technology and train talent.

Futures Command is a public-private initiative that leads modernization projects for the Army. The military chose Austin for its headquarters in 2018.

“The (defense) secretary has been very clear that modernizing is key. As deputy secretary, my job is to help bring new strategies to execution, and that line goes right through process development and capabilities for us, and eventually resourcing and that's what Army Futures Command is all about to the Army,” Hicks said.

She said it helps her to see what part the Army is playing in moving the Department of Defense towards modernization.

Futures Command won’t be the end-all standard for modernization for the Department of Defense, but Hicks said the goal is to take the best ideas from each branch's modernization efforts.

“What we really want to do at the corporate or enterprise-level really is pull up those good ideas and see what’s working,” Hicks said “From there, we can start to think about what are their major policy changes or their authority structure. Everything from promotion to how budgets are determined. We’re just at the beginning of that journey.”

Gen. John Murray, commander of the Army Futures Command, said Tuesday he believes the unit has found its balance, although he said it hasn't been easy, especially as it works to bridge the gap between the Army and its academic and private sector partners.

Murray and his unit are tasked with a range of innovation and modernization needs for the Army. Futures Command is working to develop and acquire the types of technology the Army needs now, and is also tasked with predicting what will be needed 10 years down the road.

“If we try to scale too quickly you can bake in some bad practices. I’m not going to move too fast,” Murray said. “Ultimately we’re trying to solve problems for the soldiers in the field today, and as we start to think about some of the research and development, it’s about developing technology for the future soldier who’s only in fourth grade right now.”

Hollywood writers are the latest group of entertainment industry workers being urged to get vaccinated.

The Writers Guild of America is recommending its members be vaccinated against COVID-19 before meeting up with ...Read More