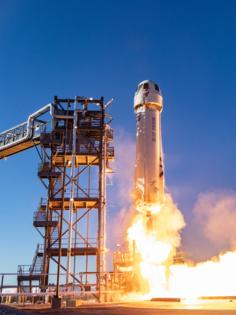 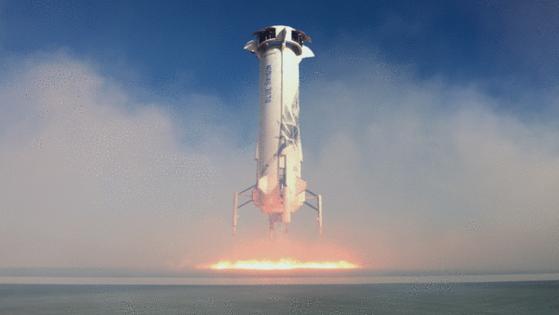 60 years to the day that Alan Shepard launched on the Freedom 7 mission to become the first American in space, the company founded by Jeff Bezos revealed the target to launch the rocket July 20.

It has yet to announce the normal price point for customers, but the auction will be open from May 5-June 12 at blueorigin.com. The winning bid will be donated to Blue Origin’s foundation Club for the Future, which aims to steer youth into STEM careers.

The New Shepard rocket is named after the astronaut, and has been in testing mode for several years, but has yet to launch and land with humans on board. The company recently completed the 15th successful test flight on April 14, passing once again the target 100,000km threshold that is the internationally recognized altitude for a person having made it into space.

When tourist flights do begin, the New Shepard capsule will send its passengers into suborbital space on about an 11-minute flight from launch to landing. The rides will allow passengers to unbuckle and experience weightlessness for a few minutes before strapping back into their reclining seats for the trip back to Earth.

With safety in mind, the capsule has an escape motor that is designed to propel the passengers away from the booster rocket, which like SpaceX’s Falcon 9 boosters, will be reusable.

While not yet revealed, the expected price point could come in around $250,000 a person, the same as competitor Virgin Galactic, Richard Branson’s space tourism venture that has set up shop in New Mexico. Virgin Galactic has flown two test flights with passengers, although to a lower altitude than what New Shepard is capable. Virgin’s target is passing 50 miles altitude, which is what the Federal Aviation Authority recognizes as the altitude for becoming an astronaut.

Both Virgin Galactic and Blue Origin’s space tourism plans aim to let passengers see the curvature of the Earth on the short flights, and the companies then plan for quick turnaround to launch the next set of paying customers.

Blue Origin capsules can hold up to seven passengers and will launch from its West Texas launch facility.

The venture is meant to raise funds for the company’s larger space plans including the development of a heavy lift rocket New Glenn, which is under construction at the company’s facility near Kennedy Space Center. Blue Origin had also been competing with partners Northrop Grumman, Lockheed Martin and Dynetics to be one of NASA’s choices for the Human Landing System for the Artemis missions to the moon, but lost out to SpaceX and its Starship design.

The company’s vision remains, “millions of people living and working in space.”

The space tourism sector includes several other companies, but many costs in the millions as they offer up longer-term orbital flights and visits to the International Space Station.

It’s just over 20 years since Dennis Tito paid a reported $20 million for a weeklong visit to the ISS flying up to the station on a Soyuz rocket.

Now, with the SpaceX Crew Dragon and soon potentially Boeing’s CST-100 Starliner, businesses are contracting to use those craft with price tags of up to $55 million a passenger for similar ventures.

Blue Origin, Virgin Galactic and the company Space Perspective that looks to fly a space balloon with passengers by 2024 look to cash in on a much larger client base with the shorter flights, but much lower costs.