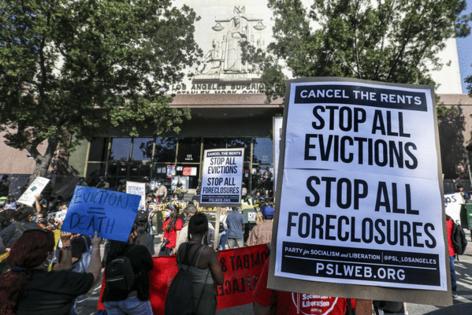 In a ruling Wednesday, U.S. District Judge Dabney Friedrich said the agency exceeded its authority by issuing a broad moratorium on evictions across all rental properties. “The CDC order must be set aside,” the judge wrote in a 20-page opinion.

The ruling is a setback for the Biden administration, which has also seen its proposed freeze on deportations halted by a court. The White House is facing several other legal challenges, including on offshore drilling, on the Keystone XL pipeline permit and on COVID-relief legislation from Republican-led state attorneys general.

The CDC moratorium, first enacted by President Trump and extended by Biden, was designed to prevent mass evictions in the face of a public health emergency that saw millions of Americans lose their jobs and fall deeper into debt. Officials also warned that ejecting swaths of renters during the U.S. winter would exacerbate the virus’ spread.

Still, it came with loopholes that allowed evictions to move forward in states and cities that didn’t enact their own more stringent rules.

A CDC spokesperson didn’t immediately respond to a request for comment on the ruling.

While government measures sought to prevent mass homelessness, there was no targeted help for mom-and-pop property owners who provide much of America’s affordable housing. For these landlords, mortgage, maintenance and tax bills have been piling up, putting them in danger of losing their property or being forced to sell to wealthier investors hunting for distressed deals.

The Biden administration has been trying to unwind the financial stress caused by the pandemic. The Treasury Department is in the process of getting almost $47 billion in relief out to states and municipalities to help people cover rental arrears and unpaid utility bills.

But the rollout has been moving slowly and varying from state to state. The ban, first enacted in September, was supposed to expire at the end of the year but was extended through June to help get the money flowing before protections ended.

Renters have been protected against eviction by a patchwork of state and federal laws. That means in many places tenants who’ve fallen behind on rent may still be covered by other measures.

Some property owners have argued that eviction bans leave them saddled with tenants who were delinquent even before the pandemic.

The U.S. asked Friedrich to limit any block on the ban to the specific plaintiffs in the case, rather than issue a broad nationwide order. But Friedrich ruled that the entire prohibition must be set aside.

Friedrich, a Trump appointee, isn’t the first judge to weigh in on the CDC moratorium.

In February, a federal judge in Texas ruled that the federal government’s power to regulate interstate commerce under the Constitution doesn’t give it the right to impose a moratorium on evictions. The U.S. appealed, arguing that the decision did not extend beyond the particular plaintiffs in that case.

In Ohio, a federal judge ruled last month that neither Congress nor federal law gave the CDC the authority to ban evictions, even though the agency had sought to help renters “struggling as so many are with the economic fallout” of the COVID pandemic.