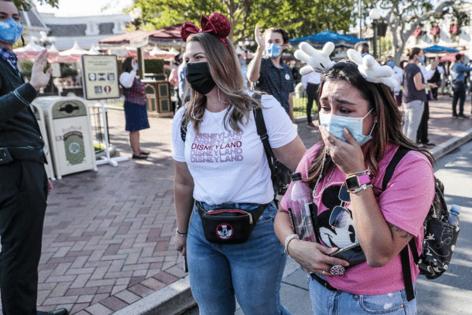 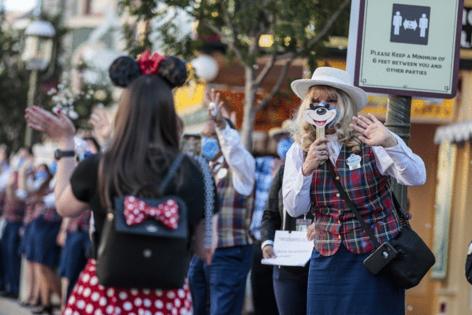 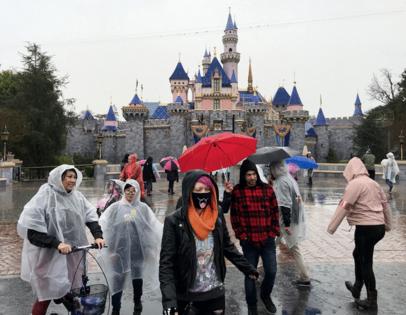 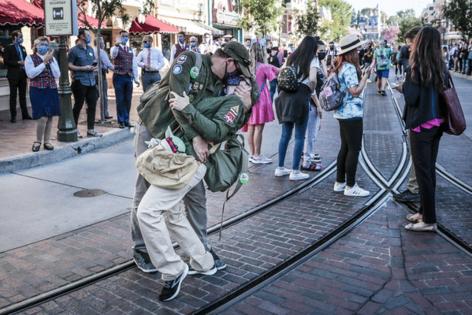 After a year in which the world came to a halt and so many experienced some form of pain, stress or grief, perhaps a theme park that can charge more than $150 per ticket would be seen as ... frivolous?

Yet if early demand, hype and talk are any indication, one of our most treasured experiences is the great American theme park. And the original Disneyland, just a few months shy of its 66th birthday, still stands as our preeminent example. Deeply embedded with a playful and sunny Southern California leisure lifestyle, Disneyland for locals is a habitual, cross-generational hangout — as much a tradition as baseball‘s opening day or a hike to the Hollywood sign.

When Disneyland re-opens today after 13 months of closure — essentially its second grand opening after July 1955 — it will do so as a Californians-only locale due to pandemic restrictions. But a quick scan of the Disneyland reservation calendar — both a ticket and a park reservation are required to visit — reveals slim options for those who solely want to visit Disneyland without purchasing a ticket that also grants access to Disney California Adventure. Dining reservations too are in short supply, if they’re available at all.

Globally, Disneyland has become one of the greatest exports of the United States, with copy-cat parks expanding the Disneyland mission not just in Florida but in Tokyo, Paris, Hong Kong and Shanghai. While there is a corporate and capitalistic mandate underlying the enterprise, one that can often be at odds with what the park represents culturally, Disneyland still symbolizes a place where America’s most popular art form — cinema — can take physical shape and become a spot to reframe, re-contextualize and reorient our relationship with our country’s myths and possibilities.

The façades of Main Street, U.S.A., may have a backlot feel, and Sleeping Beauty Castle may lack the majesty of its German inspiration, but these are very real landmarks. Disneyland’s relationship to Southern Californians isn’t all that different from other monuments — Griffith Park, Dodger Stadium, the Santa Monica Pier — a destination that collects shared experiences, a theme park that has become something akin to a national park.

It was designed at first by those trained in the art of animation, lending a quaint charm that, in the words of one of its early designers, “freaking hugs you and kisses you.”

And what, perhaps, could feel more real after a year of so much uncertainty, when daily life didn’t feel like any known reality at all? Write it all off as nostalgic escapism if you must, but I don’t think anything is more real than the stories we tell ourselves to make sense of all that we have to survive. Sometimes those stories just so happen to involve singing, sinful pirate robots.

While many of those who return, including myself, will no doubt head straight for a favorite ride or a treat, Disneyland is more than a collection of rides and calories. Here are a few small ways to rethink how we relate to the park.

Today, when we speak of big-budget blockbuster games, often the conversation turns to whether the interactive work offers an “open world.” Essentially, this is the ability to explore at one’s own pace, to pick and choose various objectives, and bask in the storytelling provided by the environment and its characters rather than follow a clearly defined plot. The goal is to create the illusion of choice — a carefully developed video game that slyly transfers the sensation of authorship to the player.

The elaborate Pirates of the Caribbean, despite being on a fixed moving boat, has long given me such a sensation. While the ride has been updated over the years to include references to the Johnny Depp-starring films — and to turn a former captured female pirate into the star of a once-outdated scene — much is largely left to the imagination, and many a set piece remains unexplained. Even the chronology of the ride can be debated, as we traverse mystical caverns — after first encountering an unidentified home on the bayou — and then cruise through a town in the midst of pillage full of dozens of stories for us to follow.

Should we be able to get out of the boat and walk around, we could trail the path of an auctioneer or go investigate some rum-drunk cats. What’s up with the dude in the barrel? How did these pirates land in jail? One could dig into the lore of Walt Disney Imagineering for answers or simply view the ride as one of endless discovery.

No wonder game designer/USC lecturer Scott Rogers once gave a talk at the Game Developers Conference titled “Everything I learned about level design I learned from Disneyland,” citing how the map and layout of Pirates of the Caribbean shaped his designs for “Pac-Man World.” Says Rogers today, “That’s when I realized that a video game level design was just a Disneyland attraction.”

When Disneyland in 2019 opened the largest single land expansion in its history with Star Wars: Galaxy’s Edge, the focus of the area was the nearly 20-minute attraction Rise of the Resistance, one that due to COVID-19 restrictions will be slightly shortened by having guests skip some pre-boarding show scenes. Rise of the Resistance is a triumph in themed entertainment design, a mix of old-fashioned dark ride theatrics with lessons from immersive theater that aim to make guests feel like more active participants.

It’s also in incredibly high demand, requiring wannabe riders to try to snag a boarding pass via the Disneyland app. But while one waits — or tries to not be bummed about not getting on — don’t overlook the Play Disney Parks app, which is hiding a relatively robust exploration-focused mobile game that works only in Galaxy’s Edge. By completing simple puzzles — aligning radio waves, connecting shapes without crossing wires — one can unlock interaction opportunities inside the land, such as causing a droid to chirp or a ship to steam.

But the real objective is to get guests walking around and viewing the entire land as walk-in board game, a platform in which guests can concoct their own “Star Wars"-inspired storylines. Too often, in a theme park land we rush from line to line, shop to shop, but the Star Wars: Datapad encourages us to appreciate the wonders of design: to admire the hand-carved rock formations and ornate starships and to take a moment to realize a fantastical environment is just an excuse to daydream.

One of the benefits of Disneyland getting a major land expansion via Galaxy’s Edge was a spruce-up for the rest of the park, from Sleeping Beauty Castle — now brighter, bolder and more overtly referencing the ink of the original animated work — to a fresh coat of paint and a few new illusions for the Haunted Mansion, a project that was completed during the pandemic.

In these pandemic times, queues for rides are required to be outside. So get to know the details that go into building a façade. The Haunted Mansion, for instance, is no simple white building.

“Part of this was to refresh the exterior and get it back to its original condition — a Southern-style mansion with various shades of white that are used to create a shadow technique,” says Disney’s Michele Hobbs, who managed the Haunted Mansion refurbishment. “It’s to evoke a feeling of depth.”

Hobbs says there are a dozen or more shades of white or off-white, all based on some of the original designs by John Hench, one of Disney’s animators-turned-theme-park architects who spent more than 60 years with the company.

Fantasyland’s ‘Snow White"-themed attraction has also received a refresh, which will be instantly apparent from the outside, where darker grays have been replaced with lighter shades of blue and purple.

For longtime fans who may lament the removal of the attraction’s more foreboding atmosphere, it’s worth pointing out that some of the original concept art of the exterior, dreamed up by artist Eyvind Earle, was brash in its use of color, placing the attraction in the context of the fantastical castle next door. All of it is a reminder that Disneyland itself is a stage, where theater envelopes us rather than performs for us.

Walt Disney Imagineering — the arm of the company devoted to theme park experiences — likes to trot out the line that the park is not a museum whenever a change occurs to a longstanding attraction. This is false. Disneyland is very much a museum, a living art gallery dedicated to the evolution of American Pop Art. The whole thing would fall apart if this lesson is ever forgotten.

Change, of course, should be embraced, and the company has recently embarked on much-needed cultural updates to the Jungle Cruise and Splash Mountain, the latter of which will soon be re-themed to “The Princess and the Frog.” And yet the park still stands as a dedication to the evolution of American cinema, from the Western (Frontierland) to the space Western (Galaxy’s Edge, appropriately connected to Frontierland). Even as attractions change, they are still born of a time.

It’s a Small World, steeped in the whimsical, approachable art of Mary Blair, opened at Disneyland in 1966, arriving at the park after debuting at the 1964 World’s Fair. Parents may groan at the seemingly endless song from the Sherman brothers that soundtracks the ride, but It’s a Small World references another time, when Disneyland showcased artists rather than intellectual property.

Consider how Blair’s lightheartedness clashed with the circus-like whimsy of Rolly Crump to result in the whimsically twisted façade for the attraction — and also more overtly responded to what was happening outside the gates. Arriving when it did in the 1960s — a period of war, social upheaval and a broader understanding of America’s role in the world — It’s a Small World is, depending on your perspective, a goofy ride with singing children or the byproduct of increased globalization.

Galaxy’s Edge, as much as it is a “Star Wars” product, is very much a work fit for 2021, with its stark delineations between the haves and have-nots, a world in which the biggest villains have the most wealth or, in this case, the biggest starships. An overly academic reading, perhaps, but the American theme park as defined by Disneyland is only six decades old, and our understanding of physical spaces as storytelling mediums is still evolving.

Besides, what, after all, is a wish upon a star if not a reflection of our innermost thoughts?