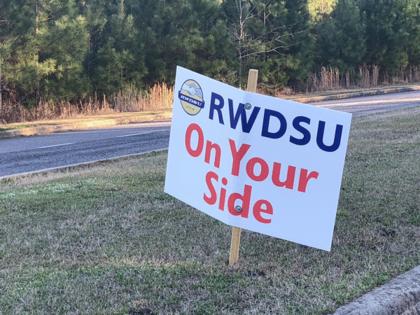 Amazon.com Inc. always had the upper hand in its high-profile battle with the Retail, Wholesale and Department Store Union over its fulfillment center in Bessemer, Alabama. It had the deeper pockets, of course, and with mandatory workplace “information sessions,” could slyly proselytize on the shop floor against the union and the financial burdens of membership.

Beyond that, Amazon also enjoyed a stark economic calculus. Three years ago, the Bessemer region wooed Amazon with an incentive package worth an estimated $51 million, one of the largest financial enticements the company has ever received to open a warehouse. At around the same time, the nearby city of Birmingham constructed three giant faux-Amazon cardboard boxes around town, part of an unsuccessful promotional stunt to try to lure Amazon’s second headquarters to the city. Like a lot of other states, Alabama wanted Amazon and its jobs in a time of widespread economic anxiety.

Employees seemed to get that voting for a union and thumbing their collective noses at Amazon Chief Executive Officer Jeff Bezos would have interfered with that objective. Out of more than 3,000 ballots cast by mail, 1,798 rejected the union. The RWDSU plans to appeal the vote and has alleged that Amazon coerced workers into voting ‘no’ through a variety of illegal means, such as forcing the post office to put a mailbox outside the facility to collect votes — a suspected intimidation tactic. For its part, Amazon seemed interested in putting the saga behind it and moving on.

But before it comfortably retires with its victory, Amazon will likely stop to carefully consider the Bessemer saga. Though it won decisively, the battle was unusually bruising, and the public is likely to remember the entire ordeal mainly for Amazon’s ham-fisted responses to criticism from U.S. Sens. Bernie Sanders and Elizabeth Warren, and the accusation that the company’s drivers often have to relieve themselves in bottles while on the road. To avoid running headlong into the next battle in an escalating war with a resurgent organized labor movement that is backed by the U.S. president, Amazon probably needs to act on a few important lessons.

The first is to listen more carefully to employees. Amazon, of course, would publicly vow that already it does so, religiously; but it didn’t instill much faith when it denied that its drivers were forced to use bottles along their routes, then apologized for the tweet a few days later and acknowledged it was a problem. During the union fight, Amazon employees told other harrowing stories; about being ordered into mandatory overtime without much forewarning or explanation; long walks to the breakroom or bathroom that eat into their two, half-hour breaks in a 10-hour shift; and the physical toll that comes from standing on their feet for a whole workday.

Bessemer employees who voted against the union say they plan to ensure the company listens to these complaints. “We already have a seat at the table, and we are talking to senior management about things we want to change,” said Will Stokes, an Amazon worker that the company made available in a Zoom press conference on Friday after the vote counting was completed. “Give us the next 100 days and let’s see what happens.”

Amazon will also have to address concerns that the fight in Bessemer indicated a larger problem in its relationship with Black workers. In the late 1990s, Amazon opened a fulfillment center in McDonough, Georgia, another predominantly Black town 30 miles south of Atlanta, then went through several management changes and ultimately closed the warehouse a few years later, at a time when it desperately needed more fulfillment capacity. The company never offered an explanation.

Other examples of labor unrest in Amazon’s network have also involved Black employees. In 2018, a large Somali immigrant workforce at a fulfillment center in Minneapolis attempted to negotiate collectively with the company; last year, Black employees in Staten Island called for unionization after highlighting what they believed were safety shortcomings during the pandemic. A recent Vox story also highlighted reports of bias and disrespect against Black workers in Amazon’s white-collar workforce. In the Zoom press conference, another employee, Lavonette Stokes, called for greater “sensitivity and unconscious bias training” for managers.

Finally, Amazon might have to reconsider the transitory nature of work in its fulfillment centers. The company trumpets its $15 hourly wage, which is about the national median for “hand laborers and material movers,” according to the Bureau of Labor Statistics—as well as the prospect of 55-cent per-hour raises every six months. But what’s not as commonly known is that these raises stop after an employee reaches three years of service, unless he or she is promoted. The ceiling is deliberate: Amazon wants employees either to matriculate into management or leave the company for opportunities elsewhere. It even pays employees thousand-dollar bonuses if they quit, calculating that if they accept the offer, they were unengaged in their work to begin with and better off elsewhere.

In Bessemer, for the first time, the union highlighted this issue. “The 5,800 employees here will possibly be making a little under $17 an hour if they work 10, 20 years from now,” said Jennifer Bates, one of the warehouse’s labor organizers, in an interview with Rolling Stone, and you can be sure this issue will come up in future fights.

Amazon might have its own reasons to reconsider limiting raises. Amazon employs more than a million people—it’s the country’s second largest private employer, after Walmart Inc. Amid potentially declining unemployment numbers as the pandemic ends, pushing workers out the door may no longer be viable.

Ironically, the company might be in a tight spot on this issue. The union can rightfully complain about the transitory nature of work in an Amazon fulfillment center. But if Amazon changes its approach and seeks to retain workers after three years, a tenured workforce will almost certainly give organized labor a more promising target.

That could mean more divisive union elections in Amazon’s future.