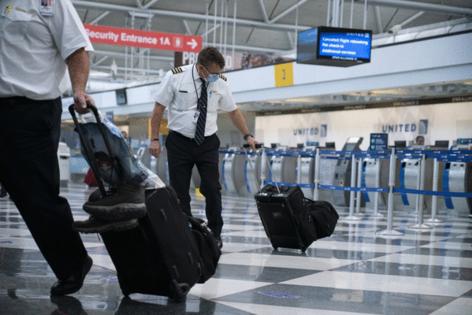 After halting hiring during the coronavirus pandemic, United Airlines is planning to bring on hundreds of pilots and launching a flight school to prepare the next generation for the cockpit.

Help wanted ads are an unusual sight after a year that saw airlines, faced with travel restrictions and empty airports, urge employees to take early retirement deals and voluntary leaves of absence. Thousands of workers faced furloughs until the federal government delivered additional aid to airlines keep them on the payroll. But as vaccination rates increase and travelers return to the skies, a pre-pandemic problem is coming back too: a potential shortage of pilots.

“It’s absolutely a question of when, not if,” said Geoff Murray, a partner on consultancy Oliver Wyman’s global aerospace sector team.

In North America, airlines’ demand for pilots could outstrip supply by roughly 13% as early as 2023, according to an Oliver Wyman report

U.S. airlines are still seeing about 43% fewer passengers than before the pandemic, and passenger numbers are unlikely to return to 2019 levels until at least 2023, according to trade group Airlines for America.

But the industry is expected to recover, and when it does, airlines will face a wave of retirements. As of early 2020, nearly half of all U.S. qualified pilots faced mandatory retirement within 15 years, according to the Regional Airline Association. Pilot jobs were scarce when the industry struggled after Sept. 11 terrorist attacks, leaving fewer to take the place of those retiring, and fewer pilots are joining commercial airlines from the military.

Some pilots who would have retired in the next couple years have left the industry during the pandemic. United said nearly 1,000 pilots left the company since September. Last August, American Airlines said 1,200 pilots had left, while unions representing pilots at Delta Air Lines and Southwest Airlines’ pilots said 1,806 and more than 500 took early retirement deals, respectively.

“We do not believe that (the pandemic) has impacted our outlook for hiring. If anything it will increase the numbers that we may need to hire in the future, especially since air travel seems to be rebounding now,” said United’s chief pilot, Mary Ann Schaffer.

United, which announced last week that it plans to hire 300 pilots who had a conditional job offer or hire date that was canceled last year, seeks to train 5,000 new pilots by 2030 at a flight school it purchased last year, the United Aviate Academy. The Phoenix-based flight training school previously operated as Westwind School of Aeronautics.

The airline started accepting applications for the first class of 20 students Tuesday and aims to enroll 100 people this year. Students can expect to graduate from the one-year program with a commercial pilots’ license and the experience needed to begin working as a flight instructor. That’s a common job for pilots working to rack up flight time needed to qualify for a job at a regional airline that can lead to a position at a bigger carrier.

Going from the academy to a job at United should take about five years, the airline said.

At least half of the 5,000 students United hopes to train by the end of the decade will be women and people of color, the airline said. Currently, about 7% of the United’s pilots are women and 13% are people of color.

It’s also pledging financial assistance: United and JPMorgan Chase each committed to provide $1.2 million in scholarships this year, and loans will be available, United said. The one-year program will cost roughly $100,000, the airline said.

The academy is part of a development program called Aviate, announced in late 2019, designed to give aspiring pilots a more direct path to a job at United.

Several airlines have similar pipeline programs, which help address one of the hurdles to recruiting new pilots: assuring people embarking on the career that there is a path to a job at a major airline, Murray said. But funding the expensive training needed to get there is still a hurdle, he said.

Many airlines paused hiring last year, hiring only about half as many pilots in 2020 as they did in 2019, according to data from Future & Active Pilot Advisors, a company that gives pilots career and financial advice. Until recent hiring announcements from United, Frontier and some regional carriers, most U.S. passenger airlines hadn’t hired a pilot since last spring whilecargo carriers FedEx, UPS and Atlas Air continued to hire through the pandemic.

Ohio-based CommutAir, which operates regional flights for United, seeks to hire 400 pilots this year, increasing its roster by roughly 40%. It plans to recruit some of the experienced pilots who lost jobs, said Rick Hoefling, president and CEO.

Illinois Aviation Academy, a Federal Aviation Administration certified flight school in West Chicago, has seen a 50% increase in enrollments in the second half of 2020 compared with the same period last year.

“Between the expected retirements and anticipated growth … that kind of dampened the fear, at least from what I’ve heard from customers,” said Robert Werderich, the academy’s president.